As a versatile conductor and an accomplished scholar, I am constantly reaching beyond the given as I strive to renew and revitalize music as a performing art. The striving has developed a unique ability not only to bridge the gap between theory and practice, but, in many ways, to erase that gap altogether through an unswerving focus on the transformative relationship between body and music. 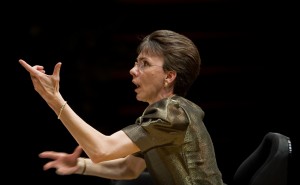 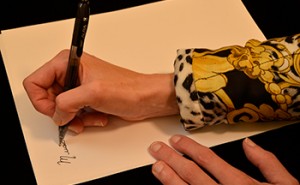 Eleanor Stubley’s artistry has touched diverse audiences throughout Canada, the United States, and Europe.  She has worked with distinguished ensembles including the Massey Singers, Electra (London), The Bach Festival Orchestra, the Canadian Opera Chorus, and the Molinari String Quartet, among others.  She has participated in projects sponsored by the Canadian Music Centre, BBC, CBC Radio, and CBC-TV. She founded Chora Carmina in 2006 to explore music’s relationships with other art forms (dance, painting, etc.).   Their first  multimedia projection Living Gestures (2006, 2009) led to a Finnish collaboration (2011) with Flikkalten Göör, dancer Kirsi Heimonen, and a commission by Anneli Arho.

She was director of the Yellow Door Choir from 1997 to 2013. The choir has a 30-year history of collaborating with Quebec artists to raise funds for local, national, and international, charities. They were featured in a Nexus Media documentary, Exporting Democracy (2012, dir. Don Duchene).  In 2013, she received the Queen Elizabeth II Diamond Jubilee Medal for her outstanding contribution to the arts.

“Watching Stubley at work is like watching a flag snap in the wind.” –Susan Pinker

A scholar of equal renown, Dr. Stubley’s writings on performance, Canadian music, and aesthetics encompass the archival curiosity of musicologist, the formal interests of the theorist, and the epistemological logic of the philosopher. Whether she is focusing on issues of place, time, or body, her interests as an artist and the memory of her hands as moving and transformative shape the style, content, and language of her work.

Her scholarly virtuosity has carried over into her teaching career at McGill University where, since 1989, she has worked with students in composition, performance, musicology, music theory, music education, and music technology. No matter their area of specialization, she encourages her students to engage with their own bodies and creatively explore their own musical experience. She challenges students to move it beyond personal and disciplinary boundaries. This approach has served her very well in her role as Associate Dean and Director of Graduate Studies.

“… a deep and precise thinker about music…” “outside of the box,” “poetic” and “refreshing.” –Roberta Lamb, Queen’s University